The sudden exit of Manchester United from the last sixteen of the UEFA Champions league was a rude shock to team and fans alike, with the derby game upon us, the Reds manager says the lack of consistency is their major problem 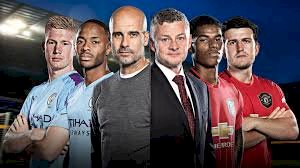 The sudden exit of Manchester United from the last sixteen of the UEFA Champions league was a rude shock to player and fans alike, on a night when a draw is all they need, it's only a defeat they can afford, going three goals down since the sixtieth minutes, the host dominate the game and first make a come back impossible for the Red Devils. Manchester United have always pride itself of good comebacks this season,  they have won more point from a losing position more than any other season since the Sir Alex era. But with a well organised and quietly compact team like RB Lipzeig coming back might be soo impossible.

Following a Manchester derby bound to unfold at old Trafford later tonight with the manager pin pointing inconsistency as the problem of the team presently, how would they faired against their back to back blue champions. Although, the Red Devils did a double on the blue half last season, it's a whole new game compared to a season ago and with the red manager admitted the teams problem, it might be a huge task to confront a Guardiola side who's getting fast into the rhythms that won them the league twice.

How Ole Gunner Solkjear intend to solve the problem his team is facing about inconsistency, isn't the real issue, but how to best manage it going into the Manchester Derby is the real deal, with the disappointment of the champions league, will the red half be able to produce the quality that can defeat a Pep Guardiola side two seasons in a role, and honestly considering Manchester United form one wouldn't bet on the red half repeating the last seasons feat, but hey...this is football, anything can happen.