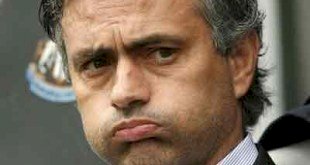 Facing a crunch match against Liverpool on Saturday, embattled Chelsea manager Jose Mourinho must confront an adversary who condemned him to one of the most painful defeats of his career.

Jurgen Klopp, Liverpool’s new manager, was in charge of the Borussia Dortmund side who ousted Real Madrid in the 2012-13 Champions League semi-finals, dashing Mourinho’s dream of bringing the European Cup back to the Bernabeu in what he knew would be his final season at the club.

The pair resume hostilities with Mourinho reported to be facing the sack if results do not improve after the defending champions slumped to 15th place in the Premier League and were knocked out of the League Cup by Stoke City, but he has played down the significance of Klopp’s arrival.

“Everything is the same. They have changed some details obviously in their tactical approach, but this is the nature of the game, especially when you are thinking and speaking about two top managers.”

Mourinho is expected to be in the dug-out despite having been hit with a Football Association misconduct charge after being sent to the stands during last weekend’s 2-1 loss at West Ham United.

But the bad news continues to pile up for the 52-year-old, with former team doctor Eva Carneiro reported to have begun legal proceedings against Chelsea after being sidelined by Mourinho earlier in the season.

Reports differ as to the likely consequences of another defeat for Mourinho, but there is general consensus that his future at Stamford Bridge is on the line.

The dismissal of Klopp’s predecessor Brendan Rodgers was a stark reminder of the cost of failure in the English top flight and while the German drew his first three games, his side travel to London on the back of a 1-0 League Cup win over Bournemouth.

With his back to the wall, Mourinho needs his senior players to stand up and be counted, but he may be without striker Diego Costa, who faces a late fitness test after going off against Stoke with a badly bruised rib.

Pedro Rodriguez will also undergo a fitness test, while goalkeeper Thibaut Courtois and Branislav Ivanovic remain out, but Nemanja Matic is available again after a one-game ban.

Klopp has also been inconvenienced by injury, with Kolo Toure, forced off against Bournemouth, the latest casualty, while Daniel Sturridge is taking time to recover from a knock sustained in training.

But James Milner is back from suspension and Christian Benteke is in contention to lead the line after missing the Bournemouth game with a knee ligament strain.

Liverpool have not beaten Chelsea in eight matches and have not won at Stamford Bridge since November 2011, when they won twice there in the space of 10 days in the league and League Cup.

But Klopp got the better of Mourinho when their paths crossed in 2012-13, with Dortmund taking four points from Madrid in the Champions League group phase before eliminating them in the last four after a stirring 4-1 first-leg win in which Robert Lewandowski scored all four goals.

While a similar outcome on Saturday could have grave repercussions for Mourinho, Klopp remains a fan.

“From my side, I am full of respect for his work,” Klopp said.

“I think if you are not a journalist or a referee he can be a nice guy, and I am not one of these so we have a good talk.

“He is emotional, I am emotional, but we are full of enough respect after the whistle that normal life starts again and you can talk normally about things that happen and that is what we did.”

STARBOY WIZKID CREATES A RECORD EARNING IN HIS LONDON TOUR

NECO REGISTRAR KILLING: HOW A NEW ERA OF ASSASSINATION CREPT INTO THE...

HOW TO MAKE MONEY THROUGH PAID SURVEYS

READ ABOUT A UBER DRIVER WHO GOT LUCKY ON DUTY